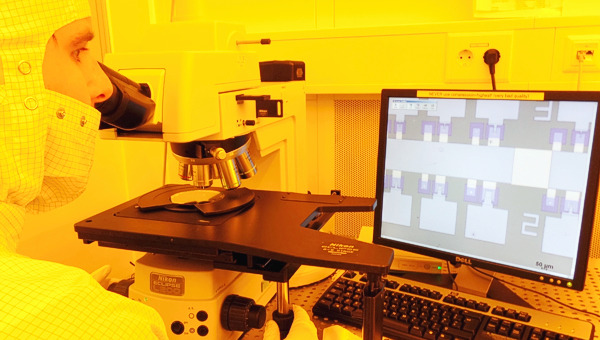 Mirko Hansen in the clean room at Kiel's Faculty of Engineering, using a microscope to check the manufactured storage cells.
Photo/Copyright: AG Nanoelectronic

Scientists from Kiel University and the Ruhr Universität Bochum (RUB) have developed a new way to store information that uses ions to save data and electrons to read data. This could enable the size of storage cells to be reduced to atomic dimensions. But that is not the only advantage of the new technology, as the researchers reported in the journal Scientific Reports.

"Six plus seven makes three - plus one carried over", calculated Professor Hermann Kohlstedt, Head of the Nanoelectronic group at Kiel University. This describes that storing information in the short or long term is important - even for the simplest calculations. Modern computers use this principle in practically every Bit (unit of measurement for the digital information content) and the almost unbelievable increase in performance over the last decade was based on a very simple rule: faster processors and more storage space.

Standard memory devices are based on electrons which are displaced by applying voltage. The development of ever smaller and more energy-efficient storage devices according to this principle, however, is increasingly approaching its limits: because there is not just one storage device in our computers, but several optimised ones, depending on the task. "Moving data between individual storage devices has now begun to take a not inconsiderable amount of time. Put simply: more is moved backwards and forwards than is calculated", said Kohlstedt. That is why industrial companies and research institutes around the world are working on a more efficient, universal storage device that combines the advantages of all storage devices and moves as little data as possible back and forth.

In order to do so, researchers want to move away from charge-based storage and towards the type which is based on electrical resistance. A component just like this has now come from the labs in Kiel and Bochum. It consists of two metallic electrodes that are separated by a so-called solid ion conductor, usually a transition metal oxide. If a voltage is then applied, the ohmic resistance of the storage cell changes. This is caused by oxidation and reduction processes on the electrodes, as well as ions within the layer between being displaced. The advantage is that cells that are constructed in this way are easy to produce and can be reduced to almost the size of atoms.

The scientists achieve a long storage time by setting the ion density in the cells precisely via the voltage applied. "That was a big challenge", said Mirko Hansen, doctoral candidate and lead author of the study from Kohlstedt's team, because electronic and ionic effects needed to be uncoupled in order to manage this. "Electrons are roughly 1000 times lighter than ions and so they move much more easily under the influence of an external voltage. We were able to successfully exploit this, whereby in our component, the ions are immovable for extremely low voltages, while the electrons remain mobile and can be used to read the storage status."

The trick: the researchers built an ion conductor, which was only a few nanometres (a millionth of a millimetre) thin to utilise quantum-mechanical effects for the flow through the storage cells. "The tunnel effect enables us to move electrons through the ultra-thin layer with very little energy", said Martin Ziegler, co-author of the publication from Kiel. To put it clearly, ions are moved within the storage cell at voltages above one volt, and electrons, on the other hand, at voltages far below one volt. This way, ions can be specifically used for storing and electrons specifically for reading data.

The researchers also reported that their research had another very interesting element. The new resistance-based storage devices could even simulate brain structures. Rapid pattern recognition and a low energy consumption in connection with enormous parallel data processing would enable revolutionary computer architectures. "This opens up a massive area for innovations in combination with terms like Industry 4.0, in which autonomous robots work, or cars which drive themselves and are out on our roads", said Professor Hermann Kohlstedt and his colleague from Bochum, Dr Thomas Mussenbrock to describe the research results. They are both working on developing artificial neural networks in the 'FOR 2093' researcher group.


Details, which are only a millionth of a millimetre in size: This is what the research focus "Kiel Nano, Surface and Interface Science  KiNSIS" at Kiel University has been working on. In the nano-cosmos, different laws prevail than in the macroscopic world - those of quantum physics. Through intensive, interdisciplinary cooperation between materials science, chemistry, physics, biology, electrical engineering, computer science, food technology and various branches of medicine, the research focus aims to understand the systems in this dimension and to implement the findings in an application-oriented manner. Molecular machines, innovative sensors, bionic materials, quantum computers, advanced therapies and much more could be the result. More information at www.kinsis.uni-kiel.de