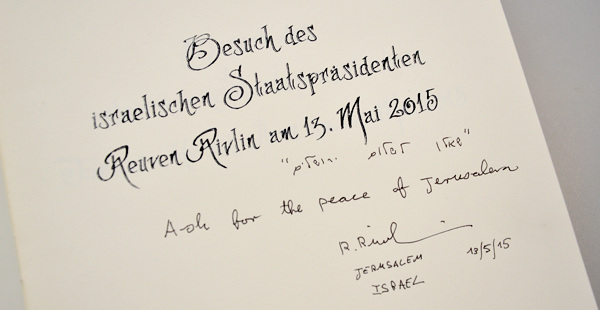 A particular honour for Kiel University in its 350th jubilee year. Upon invitation by Federal President Joachim Gauck, the President of the Israeli State, Reuven Rivlin, visited Germany from 10 to 13 May. This official visit is connected to the 50th anniversary of diplomatic relations between Israel and Germany, which began on 12 May 1965. As part of this, the Head of State came today (Wednesday, 13 May) to the Schleswig-Holstein university. In Kiel, Rivlin spoke with around 120 students and 40 scientists about the German-Israeli relations. The Israeli ambassador in Germany, Yakov Hadas-Handelsman, as well as numerous international guests, also participated in the event.

In his welcome speech, Lutz Kipp, the President of Kiel University, described the significance that scientific freedom, freedom of the press and an independent justice had for the last 70 years on Germany's democratisation and the integration of the country into the European and international community. Particularly science could reveal unforeseen opportunities in overcoming conflicts, said Kipp. "At Kiel University, we firmly believe in the spirit of free sciences and the power of critical reflection. Both can make a contribution towards pacifying conflicts between states and nations. The crucial requirement for this is to listen to each other and strive to find the best method. Universities are good places in which to develop such an understanding and to create trust and peace."

The President of the Israeli State, Reuven Rivlin, expressed: "The relations between Israel and Germany have never been a matter of course. They have been created over 50 years, on the basis of shared values. Today, the friendship between the two countries is not only one between the governments, but also between the peoples. It is a friendship that lives and that is strengthened by us and by Germany. Over the past decades, Israeli and German young people have worked together to make the world a better place. One example of this friendly cooperation can be seen in the wonderful projects that I have seen during my official visit. I would like to thank the young people who have been involved in joint projects for the mutual exchange. They are a constant reminder that a world in which mutual understanding and compassion exists is worth working for. It is these young people who repeatedly give us hope for a better future."