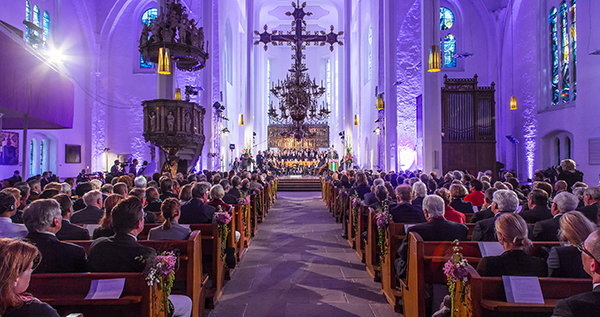 Alma Mater Chiloniensis, Kiel's university, was founded with a ceremony at Nikolaikirche (Church of St Nicholas) on Monday, 5 October 1665. Soon after, the university took on the name of its founder and has since been known as Christian-Albrechts-Universität zu Kiel (CAU). After 350 years of eventful history, Kiel University celebrated its anniversary today (Monday 5 October 2015), returning to the place of its foundation for a ceremony at Offene Kirche St. Nikolai. Around 700 guests from the worlds of politics, industry, society and academia attended the ceremony at Kiel University's invitation. Among them were Schleswig Holstein's regional bishop Gerhard Ulrich, Schleswig-Holstein's Minister-President Torsten Albig and Her Royal Highness Princess Benedikte of Denmark, as well as 26 representatives of Kiel University's 15 international partner universities.

Her Royal Highness Princess Benedikte of Denmark conveyed the heartfelt congratulations of the Danish royal family: "Since its foundation in 1665 the university has become an important academic centre. The many students, the many staff and the many numerous and diverse degree programmes at the university speak for themselves. The university has experienced really impressive development over the years. I would like to congratulate it on its anniversary and I would like wish it all the best for a successful future."

In his address on Kiel University's 350th anniversary, University President Professor Lutz Kipp looked back at the university's beginnings and development over the years and highlighted "how this development was always closely linked with the government of the time." Its time as a Danish university was characterised, he said, by notable innovations such as the establishment of teacher training in Kiel. Following its Prussian affiliation, the era of National Socialism and the accompanying "synchronisation (Gleichschaltung), expulsion (Vertreibung) and enhancement (Verbrämung) soon broke fresh ground here. As a university we are very aware of the particular responsibility that this dark chapter has imposed on us", Kipp assured, and promised that: "Every person who suffered injustice at that time, for whatever reason, will be rehabilitated. We will continue working on this."

"However dark the National Socialist era was, it has taught us a lot for a brighter future", Kipp continued and reminded his audience of how important it is to deal responsibly with freedom of research: "We are increasingly coming up against boundaries beyond which we could do things, but should rather not. How to approach these problems responsibly is something that needs to be learnt." For this reason, research and teaching must "always be questioned and reviewed in terms of their ethical implications". At the same time, a university must not shy away from pressing social issues such as access to universities by refugees.

During his welcome speech in the Offene Kirche St. Nikolai, Gerhard Ulrich, regional bishop for the Evangelical Lutheran Church in North Germany (Nordkirche), reminded listeners of the educational impulse triggered by the reformation. This was also significant for Kiel University's foundation in 1665 by Christian Albrecht von Schleswig-Holstein-Gottorf: "Education under the responsibility of the authorities and committed to the reformation set great value on both elite education and mass education. Educating the elite was necessary for a good and well-functioning community. But at the same time it was also about educational equality. Even today, Kiel University still keeps an eye on both issues - educational opportunities for many, and the promotion of outstanding talents."

The ceremony received musical composition by the members of the city of Kiel's Philharmonic Orchestra and Kiel University's Studentenkantorei (student choir), under the direction of university music director, Bernhard Emmer. More than 100 choir members and musicians performed Augustin Pfleger's "Veni, sancte spiritus", among other pieces. The Bohemian court music director wrote this piece for the foundation of Kiel University on 5 October 1665. It had not been heard again since then until Kiel University's Institute of Music prepared the sheet music for its new performance.

The première of a piece of music composed for the university's 350th anniversary was performed to guests at the concert at Kieler Kloster following the ceremony. Gunther Strothmann played his "Pax optima rerum" on the carillon. It leads its listeners on a musical journey through the university's history, beginning with a festival march for the university's inauguration, followed by a call for peace after the Thirty Years War, and closing with a cheerful final section based on a student song from the 17th Century.

Ceremonial speeches and addresses (in German)
Congratulations by Her Royal Highness:
www.uni-kiel.de/download/pm/2015/2015-350-IKH-prinzessin-benedikte.pdf


This event is taking place as part of Kiel University's 350th anniversary. The university will be celebrating its birthday throughout the whole of 2015. From sporting events, concerts, lecture series and exhibitions to conferences and research projects: with over 2,000 individual dates, the state university is showing itself at its very best and is inviting everyone to join in with the celebrations. You can find all information on this at www.uni-kiel.de/cau350/en.