Applications can now be made for TEDxKielUniversity 2016 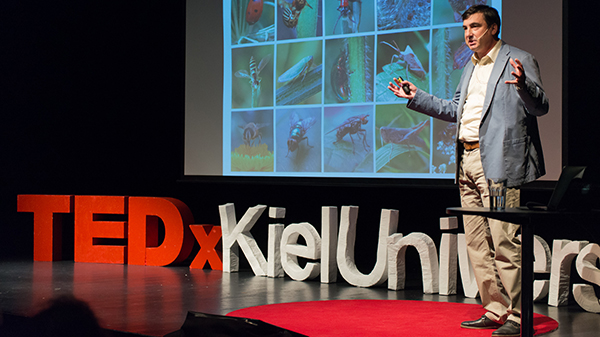 It is now possible to apply for one of the sought-after spectator tickets for the second TEDxKielUniversity conference to be held in English on 3 December in Kiel. The event is being organised by students and postgraduates at Kiel University in line with the internationally renowned TEDx format.

At TEDxKielUniversity, thinkers and doers will be illuminating the subject of "Dreams vs. Realities" from various perspectives and presenting their innovative ideas or personal experiences. Both well-known local and international personalities will be invited to the conference in the "Haus der Wirtschaft" at the Chamber of Commerce and Industry (IHK) in Kiel. There will also be an opportunity to apply as a speaker with one's own idea. Selected applicants will be given individual training to prepare them for their talks.

The special features of this event: The audience is limited to 150 and will also be selected by the Kiel organisational team from applications made by 30 September. "We would like to use the short applications to bring together committed people from various sectors across every age group and specialism at the conference, emphasised Henry Weidemann, the event's licence holder. "This includes both students and employees at the three universities in Kiel, but also anyone from the city and the surrounding area who is interested in this subject, continued Weidemann.

There is also good news for those who will not be able to attend the event in person: All the talks will be recorded. The recordings from last year's conference have already been viewed almost 10,000 times  and include lecturers from Kiel University in addition to internationally renowned speakers such as the story activist Mary Alice Arthur or the British author and TV host Martin Dorey. For example, at the first TEDxKielUniversity conference the astrophysicist Jingnan Guo spoke about a trip to Mars and the student Taylor Clarke talked of the connection between art and science.

In addition to the conference at the beginning of December, smaller salon events will be organised throughout the year by students on a course run by the Key Skills Centre (ZfS) at Kiel University. They will present recordings from other TED and TEDx events on various topics and discuss them with the audience.

About TED
TED is a nonprofit organization devoted to Ideas Worth Spreading, usually in the form of short, powerful talks (18 minutes or fewer) delivered by today's leading thinkers and doers. Many of these talks are given at TED's annual conference in Vancouver, British Columbia, and made available, free, on TED.com. TED speakers have included Bill Gates, Jane Goodall, Elizabeth Gilbert, Sir Richard Branson, Nandan Nilekani, Philippe Starck, Ngozi Okonjo-Iweala, Sal Khan and Daniel Kahneman.

TED's open and free initiatives for spreading ideas include TED.com, where new TED Talk videos are posted daily; the Open Translation Project (www.ted.com/pages/287), which provides subtitles and interactive transcripts as well as translations from thousands of volunteers worldwide; the educational initiative TED-Ed (ed.ted.com); the annual million-dollar TED Prize (www.tedprize.org), which funds exceptional individuals with a "wish", or idea, to create change in the world; TEDx (www.ted.com/tedx), which provides licenses to thousands of individuals and groups who host local, self-organized TED-style events around the world; and the TED Fellows (www.ted.com/fellows) program, which selects innovators from around the globe to amplify the impact of their remarkable projects and activities.