It depends on the level of stiffness: Kiel researchers investigate beetle penises 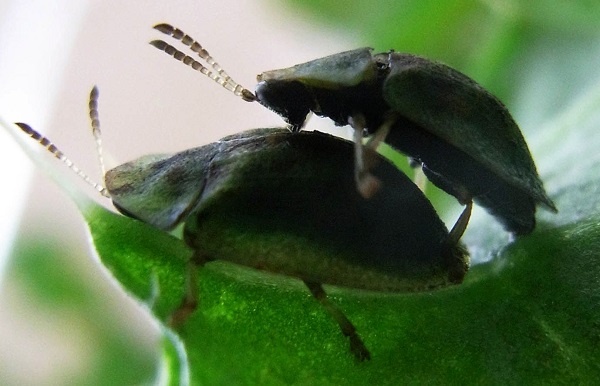 The penis of the thistle tortoise beetle is as long as the beetle itself. Something that initially sounds exciting, can be complicated during mating. This is because the females also have a hyper-elongated sexual organ, which is additionally twisted in the shape of a spiral. How beetle reproduction can nevertheless be successful has now been investigated by Dr. Yoko Matsumura, Dr. Alexander Kovalev and Professor Stanislav Gorb from the Zoological Institute of Kiel University. In the journal Scientific Reports, the researchers report on penis specific mechanical properties, which are most suitable for propulsion into the female, and come to new conclusions about sexual selection.

Males and females prefer certain sexual partners on the basis of various external criteria. In evolutionary terms this selection has a major influence on the shape and appearance of the creatures. This effect becomes particularly noticeable in the shape of the sexual organs. However, previous research in this field concentrated more on the appearance of the organs and less on their bio-mechanical function. Using the very distinctive sexual organs of male and female thistle tortoise beetles (Cassida rubiginosa), researchers at Kiel University have been able to investigate the mechanics on the male and female reproductive system for the first time.

First of all, the postgraduate research fellow Yoko Matsumura looked at the genitalia of the female beetles using a laser scanning microscope. "Like most insects female beetles have a spermatheca. The sperm is preserved there for a while before the eggs are fertilised", says the researcher from Japan. The entrance of this spermatheca is very long and twisted as a spiral. However, the structure is not uniform, but complex, explains Matsumura: "like a telephone cable, the spermathecal duct has numerous turns, which sometimes also run in opposite directions. We wanted to find out why the beetles have such a structure." The team from Kiel has been looking for answers to this question for the last two years.

However, the beetles were not disturbed during their love games for the sake of science. "The thistle tortoise beetle is about the size of a finger nail. The penis is approximately ten millimetres long. Its diameter is ten micrometres. This is about ten times thinner than human hair. The internal lumen is only a few micrometres thick. This makes a real mechanical measurement in such an intimate area very difficult", says the biophysicist and engineer Kovalev. Instead the researchers have found a mathematical way. They were able to check various structure-function relations on the computer using a numerical model. Kovalev: "The first stage of our investigation was to see how the shape of the spermathecal duct influences sexual intercourse. The more turns there were in the opposite direction, the more energy was required for the penis to penetrate." The female structure therefore makes sex for the male beetle a real challenge.

In the second stage the researchers examined the beetle's penis in more detail. "Using a laser scanning microscope we found indications that the penis is differently stiff. Therefore, the tip of the penis is probably softer than the rest of the organ", reports Matsumura. On the basis of this hypothesis the scientists together with Professor Alexander Filippov (Institute for Physics and Engineering, National Academy of Science, Donetsk, Ukraine) drew up four mathematical models: a completely hard and a completely soft penis as well as a version with a hard penis tip and soft base and the opposite version. With the four models they tested using numerical simulation which version was the easiest to insert into the virtual spermathecal duct.

We now know: It is important how stiff the penis is. The fastest was the penis model with a soft tip and hard base, says Matsumura. It is flexible enough to adjust to the narrow turns. The investigations in Kiel show that the physical properties of the penis are decisive with regard to the complicated structure of the female. "When we started with the project, we expected a sexual conflict among the beetles. Our research has confirmed this assumption. The female structures make penile propulsion difficult for the males", says Matsumura in summary. The soft penis tip is the male strategy to beat this "defensive system".

However, the question remains open: Why do the female beetles even have such long and twisted organs, which make fertilisation more difficult? "So far we have only been able to speculate on the reasons for this", says Matsumura. One theory states that during sexual selection the females prefer males who can insert their penis quickly. "On average the beetles have sex for 40 minutes, some couples even for several hours. While they are doing this, they can easily be captured by enemies." Further investigations are intended to provide clarity about the complicated evolutionary background to beetle sex. The effort is also worthwile from the biomimetics point of view: The composition and the mechanics of such miniature structures could provide new ideas for medical micro injection needles.